On Baby Blues’ website, they describe their BBQ style as a “hybrid”. Their spare ribs are Memphis style, their pork is smoked in Guiness beer, and their sauce is from Carolina. Here’s my advice to Baby Blues: pick one style, stick with it, and perfect it.

It was late-afternoon when we got to the Venice Baby Blues location (there’s another one in West Hollywood). The walls were lined with a little bit of everything: a guitar, lots of posters, and lots of pictures. We were seated, and given menus. Since we brought our appetites with us, we ordered a ton of food for two people: a half-rack of spare ribs, a half-rack of baby backs, half-a-pound of brisket, half-a-pound of pulled pork, two sausage links, a quarter chicken, mac & cheese, and cole slaw. Like I said, a ton of food. 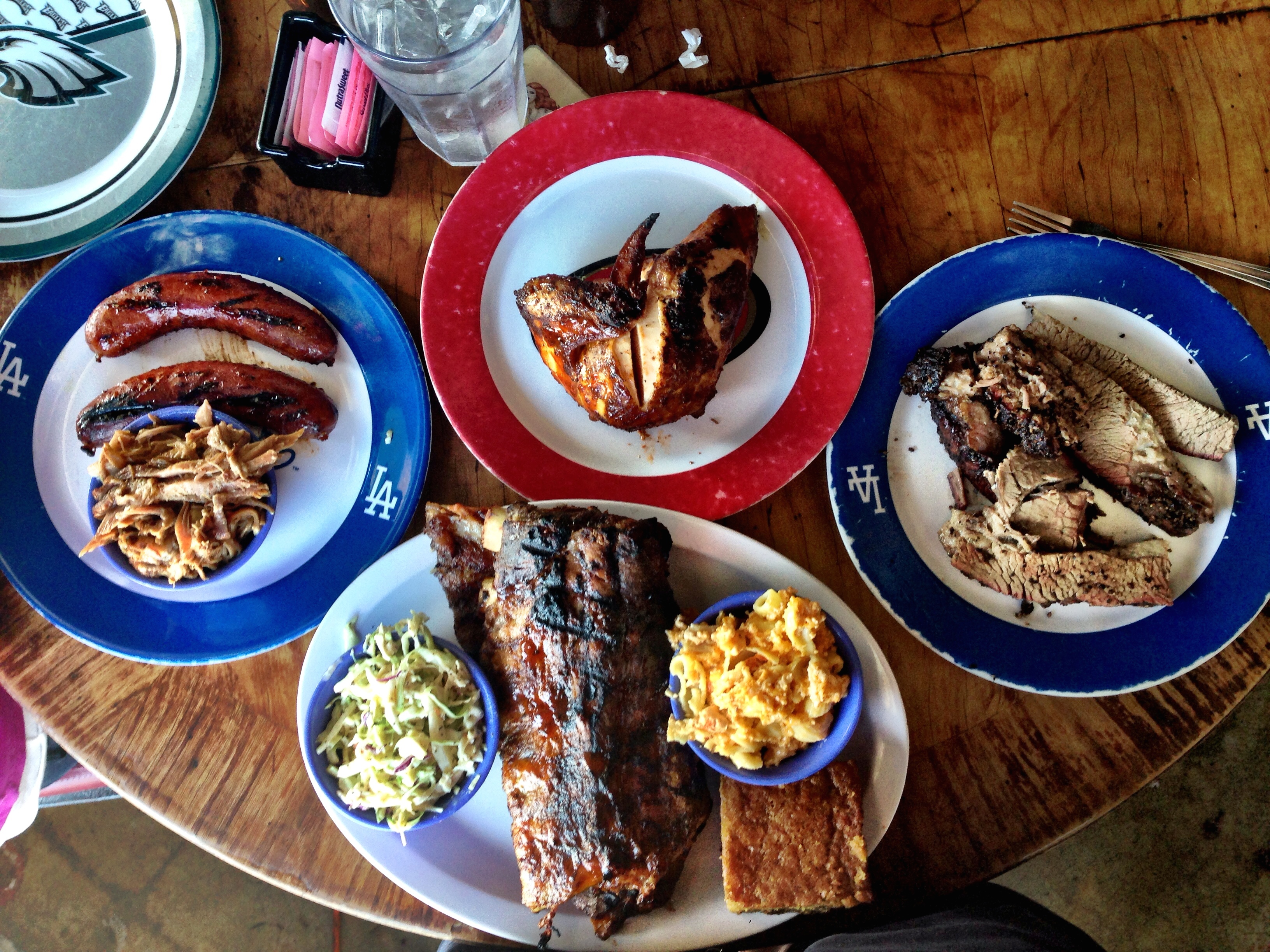 Our order came out relatively quickly, and we decided to start with the ribs. Even though we ordered two types, it was impossible to tell the difference not just by the looks but also by the taste. They both had thick, tough barks that were intensely smokey. The problem was, the meat had none of that smokiness. It was cooked well, although a little on the tough side, and had little spice to them. It was as if they were grilled, put in a fridge, re-grilled, and then drenched in liquid smoke. Any of their four sauces helped, although not much. 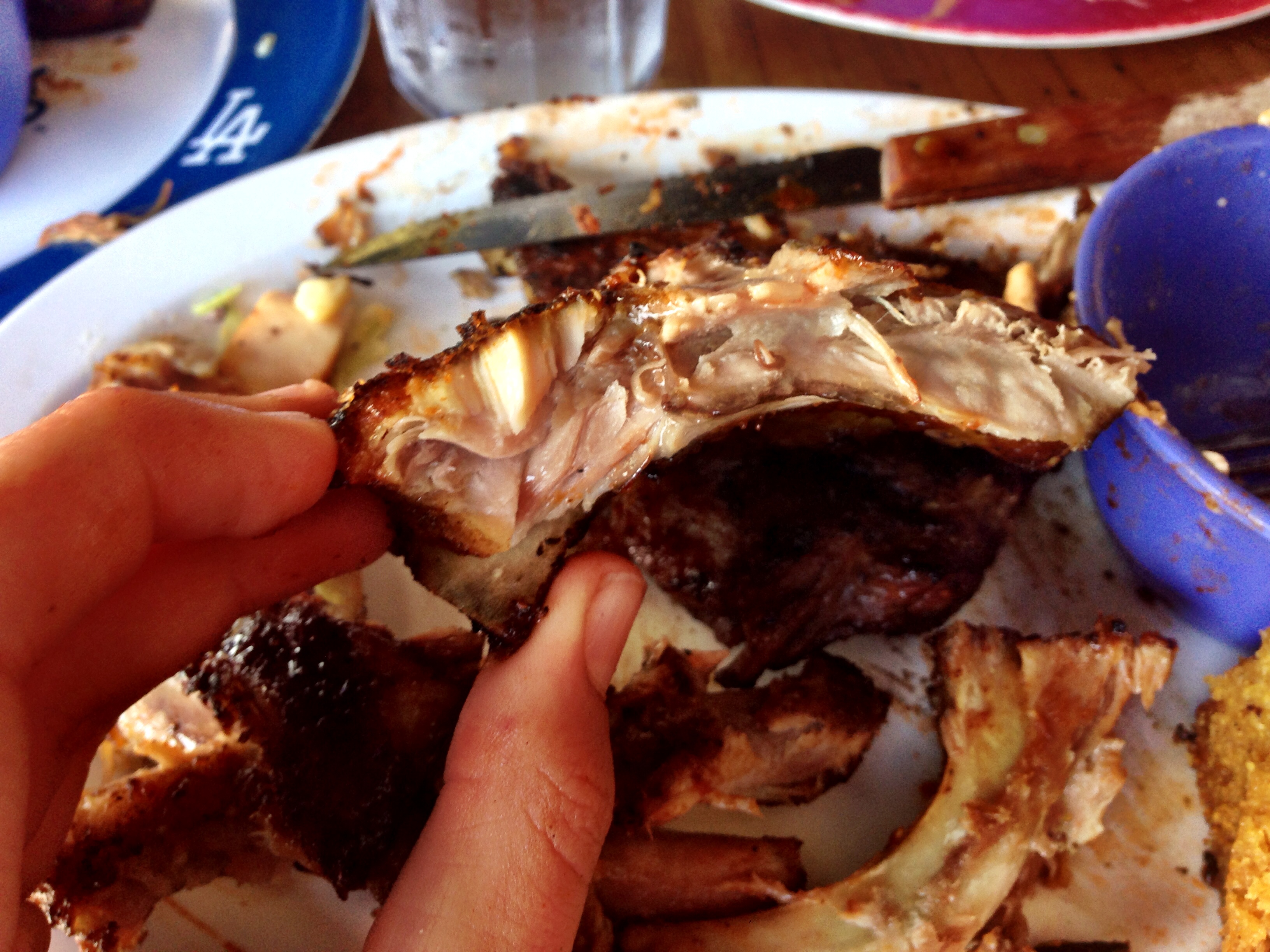 Either a baby back rib or a spare rib. We’re not sure.

The chicken was the best meat of the day, but it tasted more like grilled or roasted chicken than smoked chicken. It was tender and juicy, though, and had a little kick to it. Just like the ribs, it too had an intensely smokey outside, but no smoke on the inside.

Next up was the brisket. From first glance, it was clear brisket wasn’t their specialty: it wasn’t cut well. Some slices were over an inch thick, others started a quarter inch thick and became progressively thicker, having been cut diagonally. It was tough as can be and had way too much pepper, although the pepper didn’t seem like it was cooked with the meat; it was like they put it on after they cooked it. The aftertaste was the worst part, tasting slightly acidic. I’ll give it this: it did have a nice smoke ring. I just wished that I could tasted any hint of that smoke. 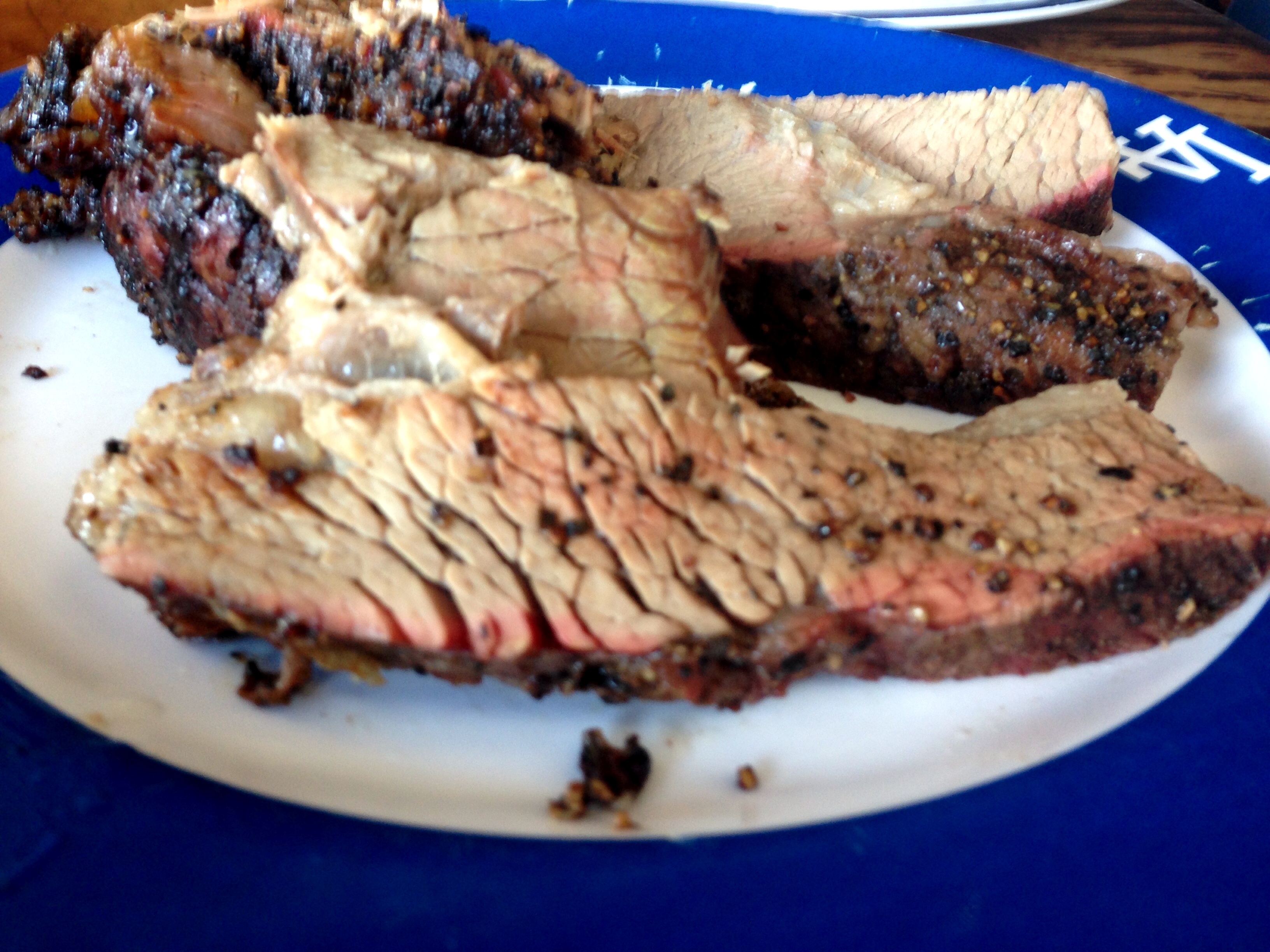 The toughest brisket this side of the Mississippi. 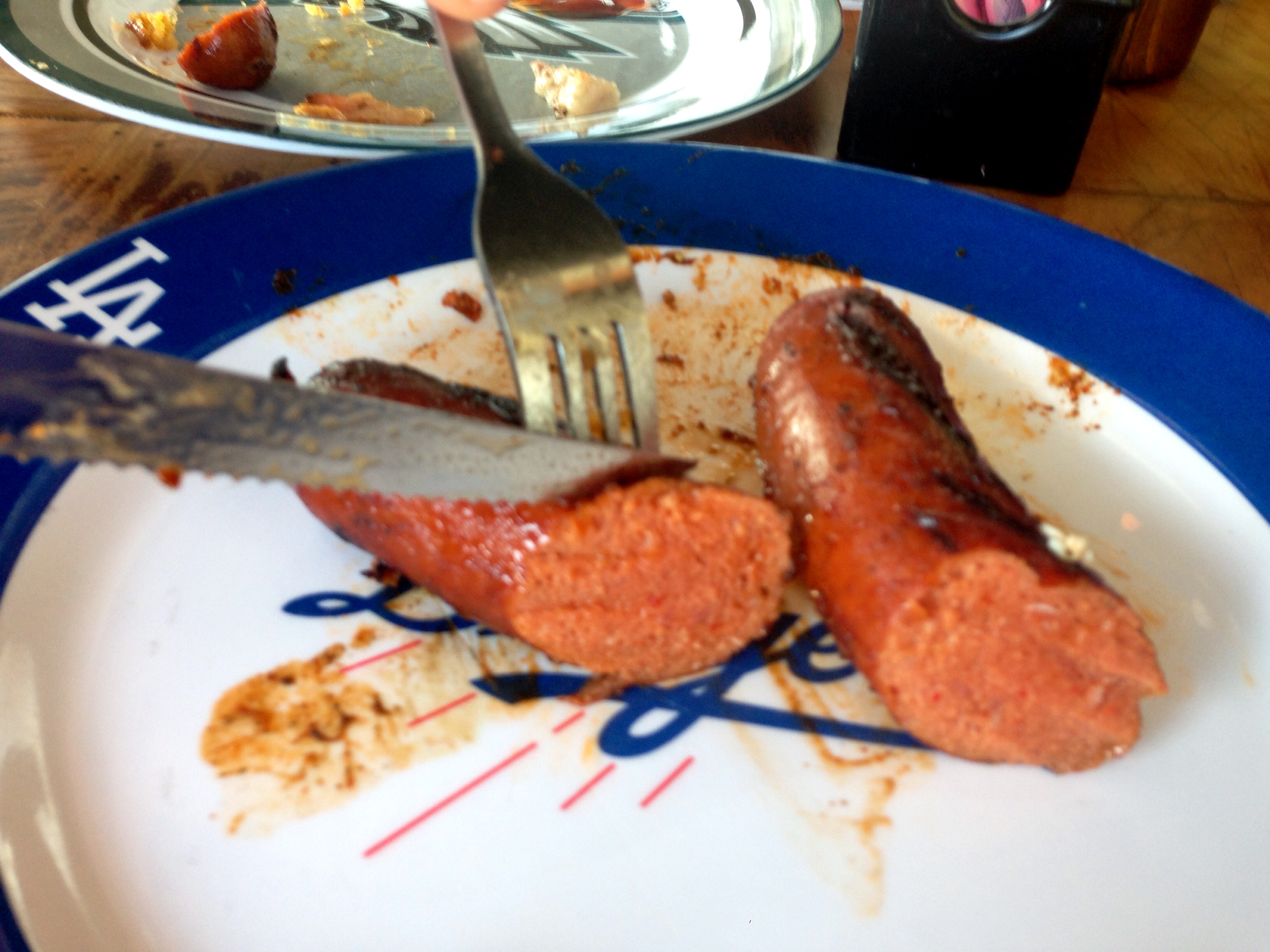 Last and definitely least was the pulled pork. The bottom of the bowl it came in was full of pork juice, and the further down in the container we got, the worse it was. It was slimely and felt like it was crawling around your throat. Don’t try the apple cider vinegar on the table with big writing saying “great with pork! Try it! Try it!”, it made it nearly inedible. With a quarter pound left, PJ lost a bet and had to eat all of the rest of it with the vinegar. I’m surprised he didn’t see it again.

The sides were very average. The mac & cheese tasted like the first mac & cheese you think of when you hear those three words, and the cole slaw tasted like it was bought from the grocery store.

The standout food of the day was the banana pudding. It was thick and rich, with just the right balance of banana and vanilla wafers. I wish we had gotten three more. 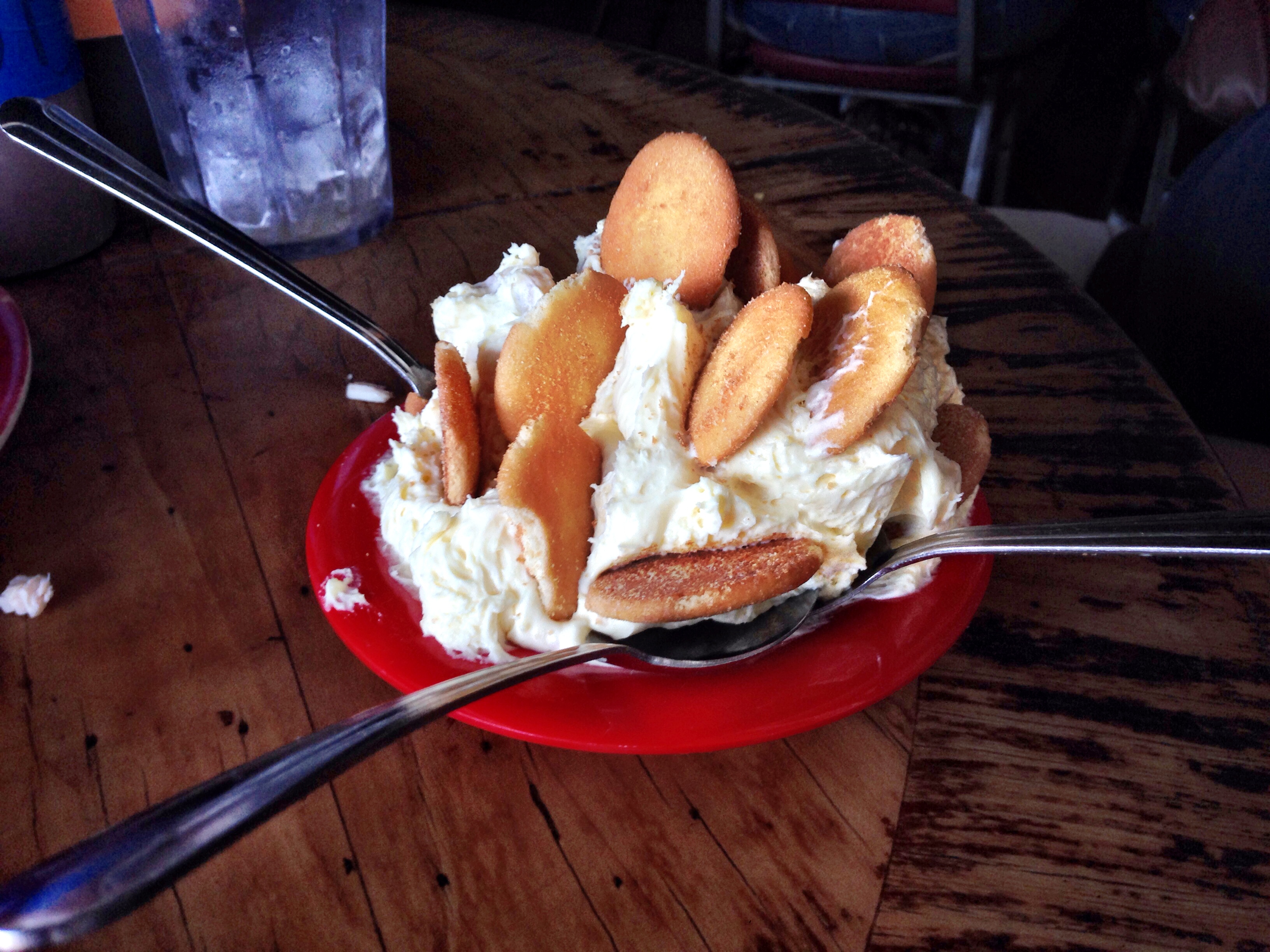 The thickest, richest banana pudding you’ll ever have.

I will give Baby Blues this: their service was outstanding. The employees couldn’t have been nicer. They were helpful, knowledgable, and friendly. After we finished eating, we asked if we could check out their smoker, and they let us. It was a small one, and the guy that took us back there said they had a bigger one off-site where they cook everything; the one in the restaurant was just to finish things up, which explains the smokiness on most of the food only being on the outside and not on the inside.

Food: 1.25 stars: Nothing was worth a second trip except for the banana pudding.

Atmosphere: 3 stars: Nice people and lots of cool memorabilia on the wall. No complaints except that the food wasn’t sliced in front of us.