When owner Wade moved from Austin to Los Angeles years ago, he did it because “I’d just lived there forever. I had to leave.” Little did he know that once he got to LA, he would bring a little slice of the city he left to his new one in the form of Horse Thief BBQ. Thank the lord he did.

Horse Thief is smack dab in the middle of downtown at Grand Central Market. The line queues around a main counter and after ordering your meat (which is a tad pricey at $24 for a pound of brisket and $26 for a full rack of ribs), it is served with white bread, pickles, and onions on a metal cafeteria tray covered with pink butcher paper. Seating is at wooden picnic tables under large and shady trees with music playing over the sound system. They have 10 beers on-tap, and trust me when I say that the people watching is unrivaled anywhere in the world. 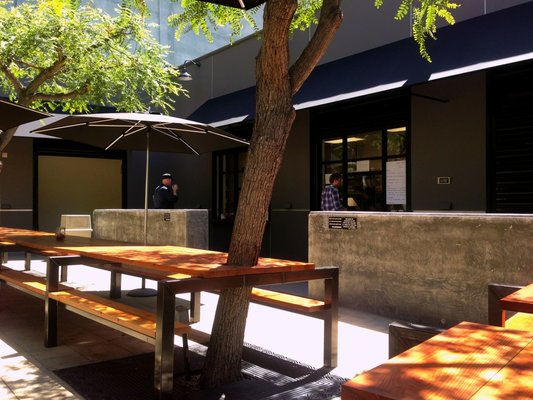 The counter (right) and the seating area. Not only is it comfortable, but the people watching is amazing, and the view of Angels Flight is pretty cool too.

We went twice in as many weeks: the first time we got some pulled pork, ribs, brisket, slaw, potato salad, and mac and cheese; the second time, at the end of the day, we ate all the meat left: two pounds of brisket and a pound of pulled pork with slaw, greens, black-eyed peas, and banana pudding.

The feast…please and thank you.

The brisket is as greasy as can be. It’s worth noting that if you order brisket at the counter, you’ll get it moist whether you like it or not, since the lean cut is chopped up for sandwiches. The moist slices live up to their names. It doesn’t take much (if any) to chew, and a finger can pass through fat without any resistance. Flavor-wise, the smoke from one of the three cabinet smokers visible from inside the kitchen isn’t in-your-face, but it’s definitely there. There’s a thick, flavorful, jet-black bark covering the outside, which provides even more salt and pepper flavor. Once we started eating it, we couldn’t stop. 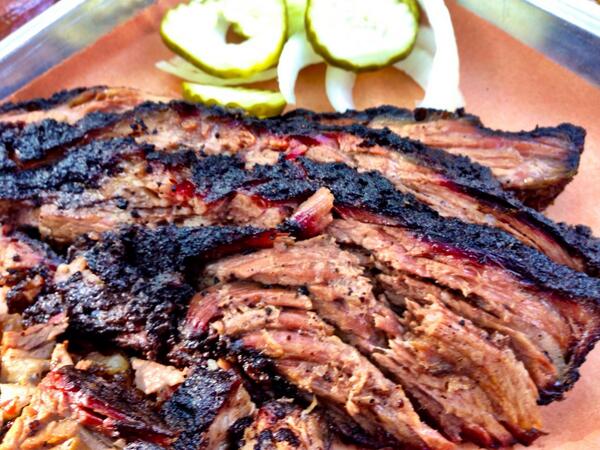 The ribs were sweet with an auburn, brown sugar filled rub. They had a sweet and smoky pork flavor to them, but little to no bark. They were a little undercooked during our first visit, and we couldn’t try them the second time since they were sold out. Overall, they were just average at best. 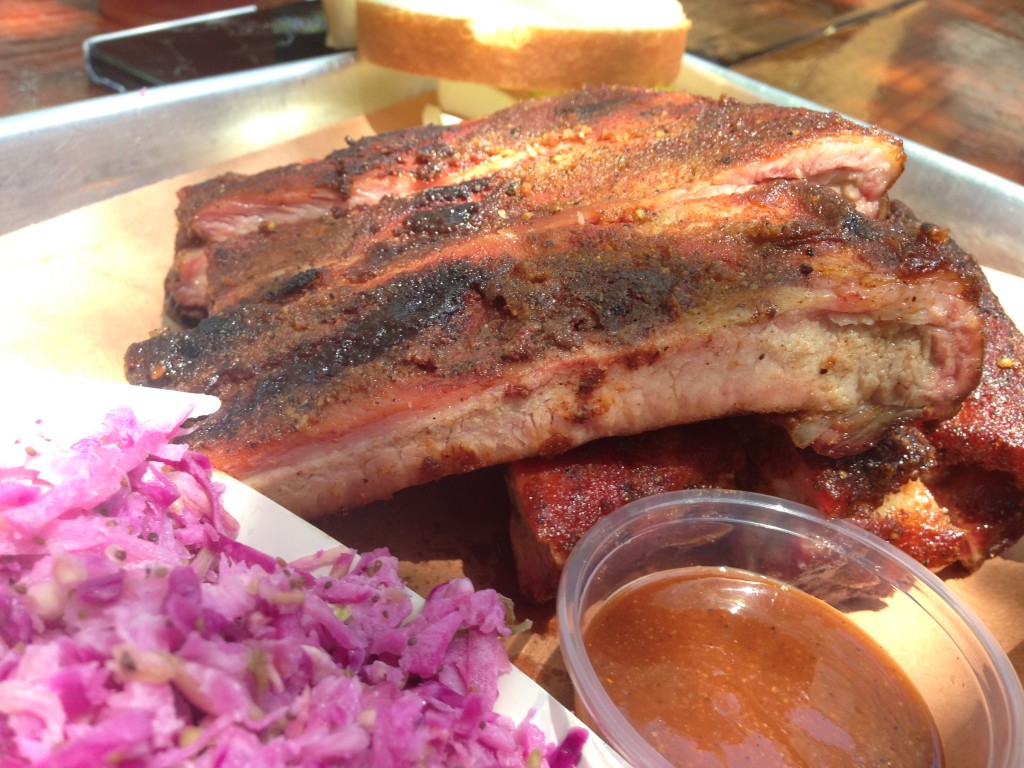 PJ described the ribs as “photogenic”.

The pulled pork’s strength was its bark, which PJ described as “AMAZING!” The pork was smoky and moist, but not mushy like some pulled pork can be. It tasted just as good (if not better) by itself as it did with sauce, another rarity when it comes to pulled pork. I’ve never been a pulled pork fan myself, but I ate every last bit of the pound that we ordered, and especially for a Texan joint, it was excellent. 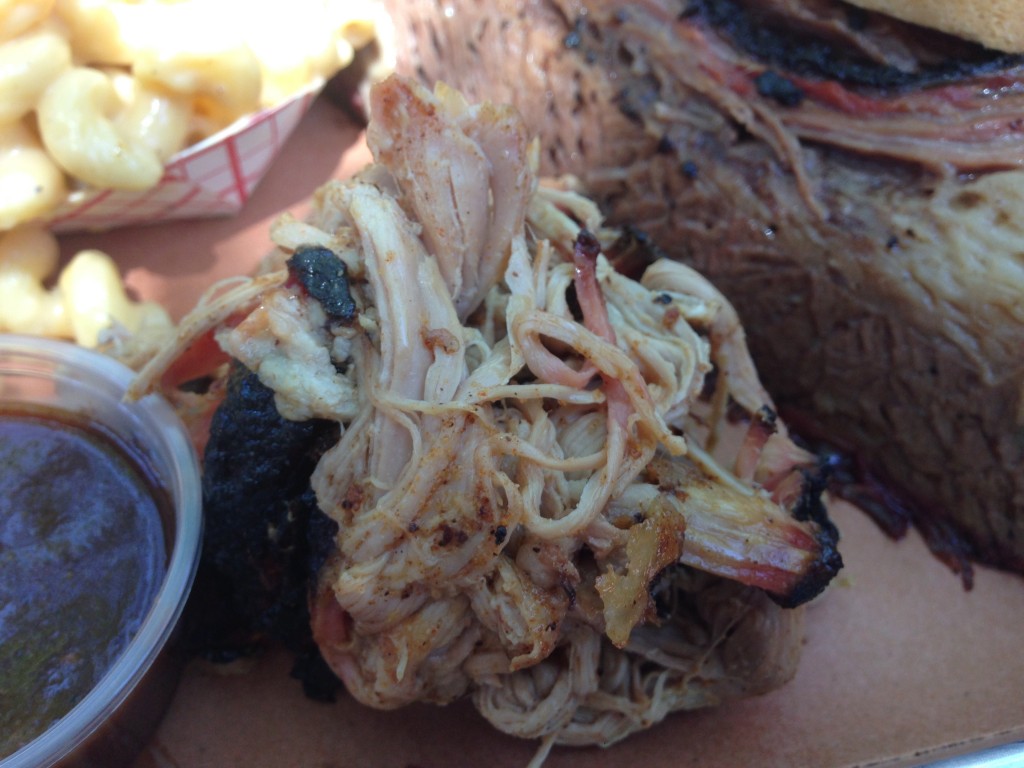 Wade describes his sides as “modern”. And he’s right. They aren’t your traditional ones. Horse Thief deserves credit for making all their own sides and doing them well. The mac and cheese has a touch of jalepeño, that gives it a unique contrast to the creamy, sharp cheese. The cole slaw is made of jicama and while eating it, it’s clear that it was homemade. It’s fresh, not overly-drenched in dressing, and compliments the meats perfectly. The potato salad tasted like a cold, loaded baked potato with bleu cheese (yes, that’s a very, very good thing). The black-eyed peas were a tad over-salted but had a slight kick to them. The collard greens were the best of the sides, not soggy, just a touch of spice, and the exact right amount of salt. 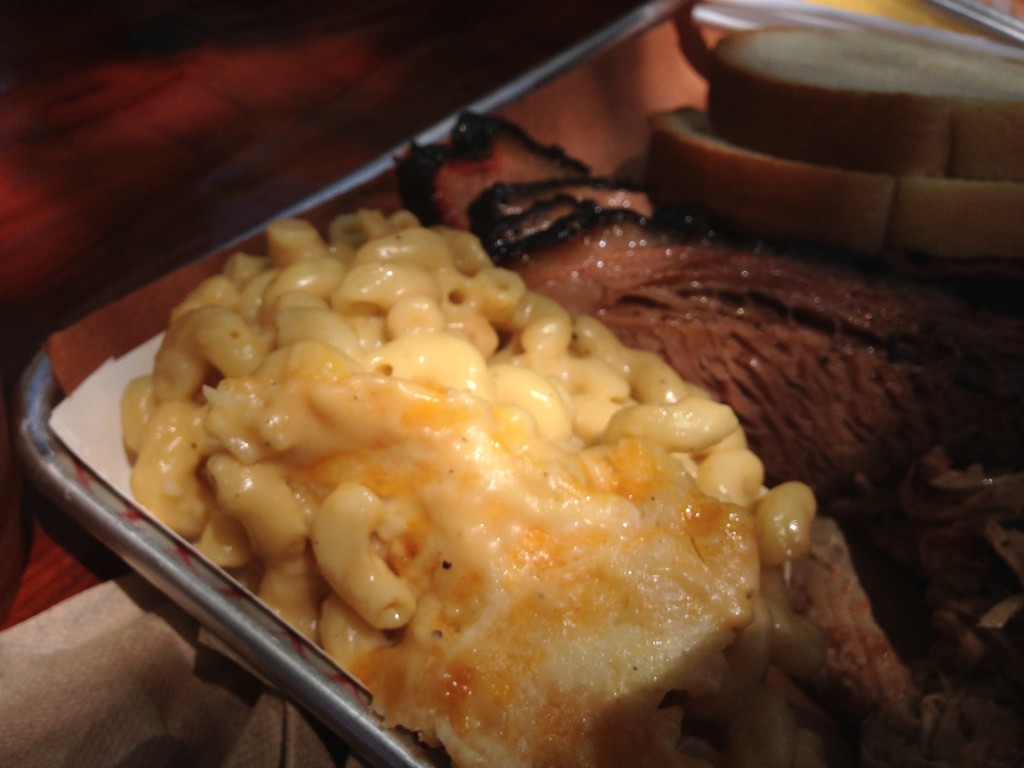 My love for mac and cheese cannot be healthy.

Then, Wade and Co. went and topped the meal with the perfect banana pudding. It was creamy, without any of the far-to-often used artificial banana flavor. Unlike some puddings, it wasn’t too heavy and the ‘nilla wafers weren’t soggy either. If there’s a better banana pudding in the world, I’ve yet find it.

Food: 4.25: The ribs were the worst of the bunch, and even they were enjoyable.

Atmosphere 5: The picnic tables, butcher paper, music, and beer selection are all that you could ask for and more.

Overall 4.5: You’re not going to find better in Los Angeles. Make it to downtown if you love BBQ, it’s worth it.