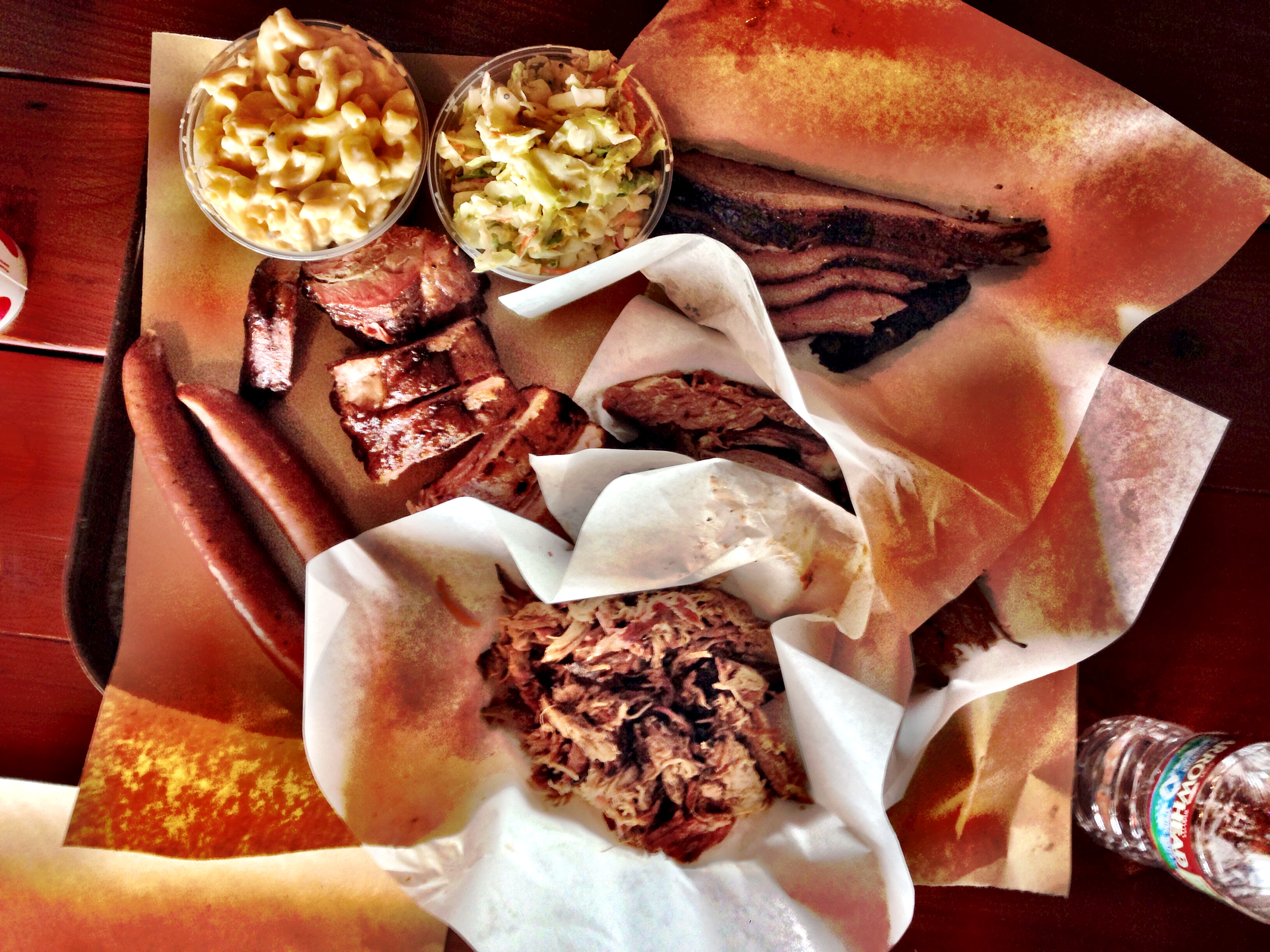 Walking past stacks of oak and into Smoke City Market in Sherman Oaks is like walking into Texas transplanted to the middle of Los Angeles. Meat is ordered by the pound at the counter and is placed on pink butcher paper. Forks are discouraged. Sauce is too. Shiner Bock is available on tap. Walls are painted burnt orange. Like I said, it’s Texas in the middle of Los Angeles.

We ordered some lean and moist brisket, pork spare ribs, pulled pork, and sausage with cole slaw and mac and cheese on the side. It was a meat-filled, delicious looking plate, and we started to dig in with the most important part: the brisket.

At first glance, the brisket appeared to be untrimmed. On one slice of the fatty brisket, we measured a little over three quarters of an inch in fat. The meat was tender, though, cooked nearly to perfection. Unfortunately, the tenderness and joy of biting into a well cooked brisket was not followed up with flavor. Barely any smoke, barely any rub. Lots of blandness.

Brisket. WHY IS IT SO HARD TO GET A SMOKE RING?!?

Next we took a rib, which happened to have the opposite problem of the brisket. Flavor-wise, it was spot on: smokey, with the right amount of salt and pepper. The tenderness wasn’t there, though. One bite pulled every shred of the overcooked meat off of the bone. It seemed like it could have been a one time thing, but we’ll have to go back another time to find out for sure.

Ribs were SO close.

The sausage tasted like any other sausage you would find at a BBQ restaurant. It lacked heat but had perfect texture to make up for it.

Finally, we tried the moist but not smokey pulled pork. The meat’s lack of flavor took away from the nearly perfect bark on the outside, and the vinegary took away from it even more.

Pulled pork was almost there too.

Sides-wise, nothing stood out. Both the cole slaw and mac and cheese were exactly what you expect but not special. It tasted fine without it, but we highly recommend mixing in some of Smoke City’s BBQ sauce to take the mac and cheese to a whole new level.

Food: 3 stars: Everything was good. Nothing was great. If I was nearby, I’d definitely stop in for some lunch, but I wouldn’t go out of my way to get some.

Overall 3.5 stars: If only the food could have been as authentic as the restaurant itself.