Chinatown isn’t normally where someone would think to find a BBQ joint, but once inside Spring St. Smokehouse, there isn’t a fortune cookie in sight. The walls are lined with examples of their extensive beer selection, which made it feel like more of a bar than a smokehouse. We weren’t there for a beer, though, we were there for some smoked meats. 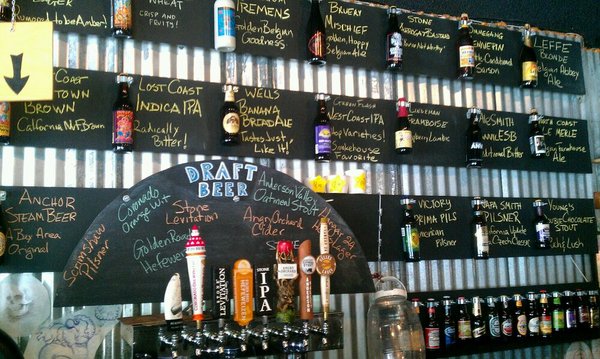 A sample of the Spring Street’s decor. Judging from this, you would think it was only a bar.

The second we walked in, we were greeted with a friendly, “Hi. How are you guys doing today?” It’s worth noting that the service throughout our visit was top-notch, up there with Baby Blues as the friendliest in LA. We ordered our usual brisket, pork ribs, sausage, mac and cheese, cole slaw, and beans. While we were waiting to be served, we peaked into the kitchen and saw a medium-sized cabinet style smoker. No wood was anywhere in sight. Then, the food came.

We got sauced. For the first time in our month-and-a-half of reviewing LA barbecue joints, we got sauced. I would have guaranteed that it would have happened to us sooner, but whenever it does happen, it’s an unforgivable sin. The only reason to sauce your meat is to cover up bad BBQ, and that certainly was the case at Spring St. Smokehouse.

Disclaimer: we are going to try to review the meats by themselves; however, it was hard to get past Spring St.’s terrible sauce. It was cinnamony and sweet. There wasn’t any BBQ flavor whatsoever, they didn’t even fake it with liquid smoke. Note that we aren’t saying “Spring St.’s BBQ sauce”, we’re just saying “Spring St.’s sauce”.

The brisket had a nice tenderness, though edging near too dry. There was a bright pink smoke ring, and some bark too. Once you got past the sauce, it looked promising, but t didn’t taste that way. It had hints of smokiness, but mostly, it was lacking in flavor. Neither of us went back for a second piece. 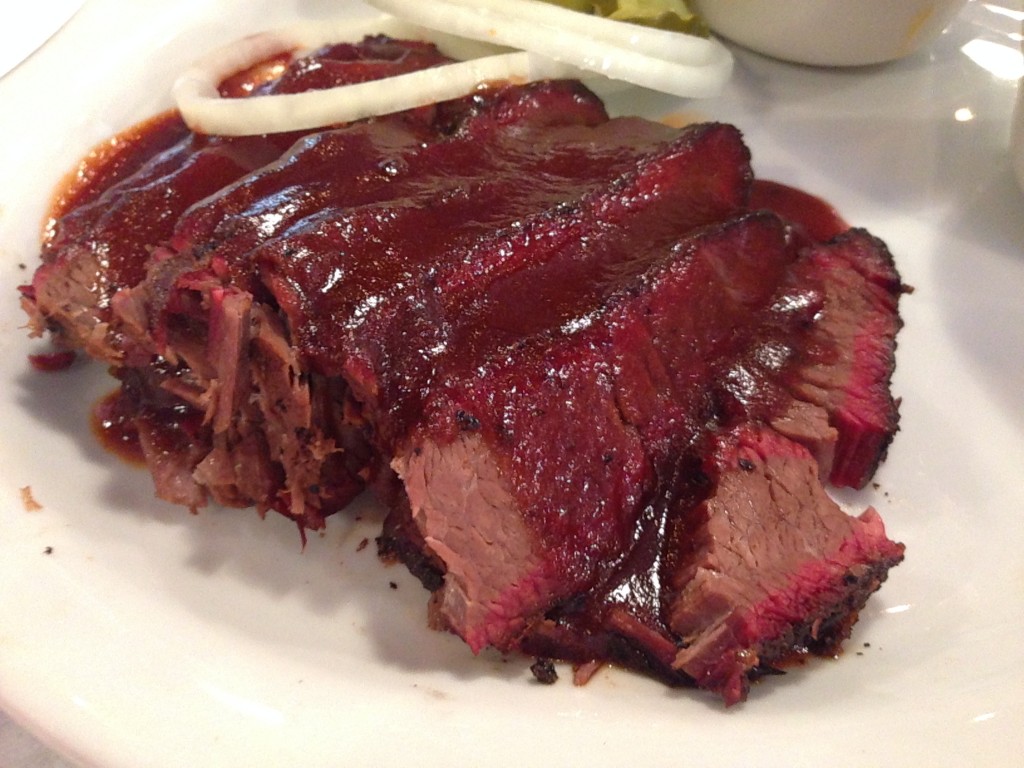 Once you got past the sauce, the brisket looked delicious, but in the end, it was lacking in flavor.

Nor did we try a second rib after our first. They too were drowned in sauce to cover up a lack of flavor, tasting grilled. There wasn’t any smoke flavor (or any flavor really) in the meat, definitely no smoke ring, but there was a thick, tough bark that made eating them extremely unpleasant. It took a big, hard bite to get some meat into our mouths, and by the time we did, we wished we hadn’t. 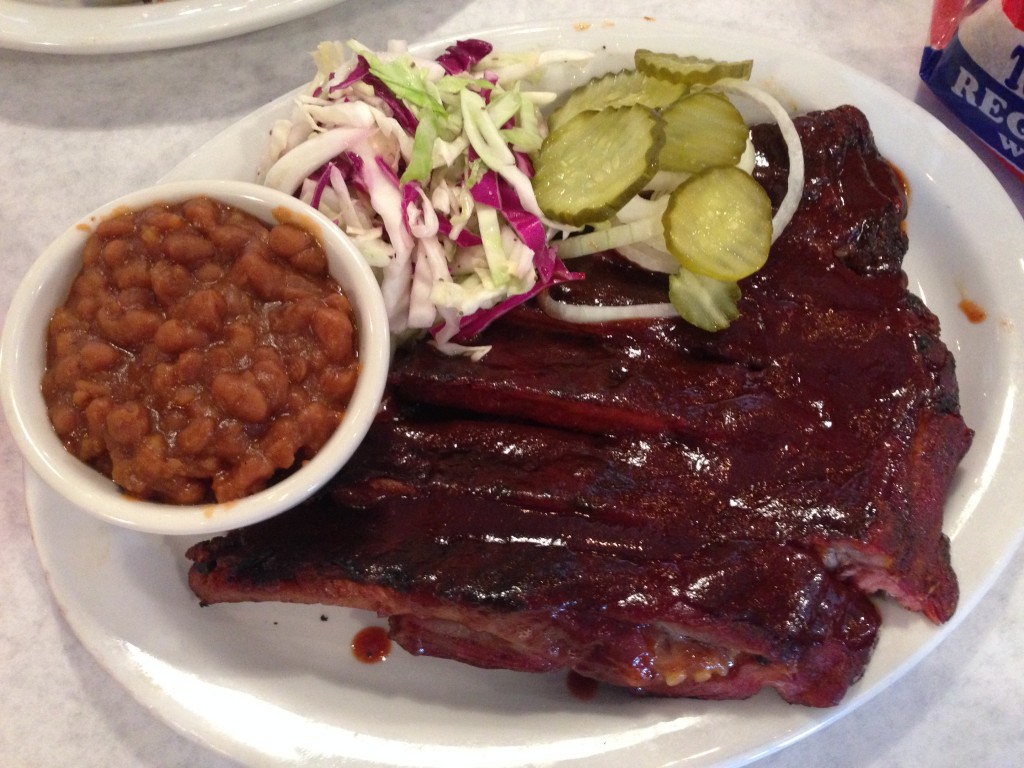 The ribs were shielded by an incredibly unappetizing bark.

Even the sausage was swimming in sauce. The snappiness and moistness was there, but the link’s flavor was unlike any I’d ever tasted and not in a good way. The best way to describe it would be that it tasted like someone ate an entire bowl of gumbo and put the chewed-up result back into a casing. Spring St. didn’t specify what kind of “hot-links” they were, but judging from the taste, it seemed like there was some seafood, which is not needed in a BBQ sausage. 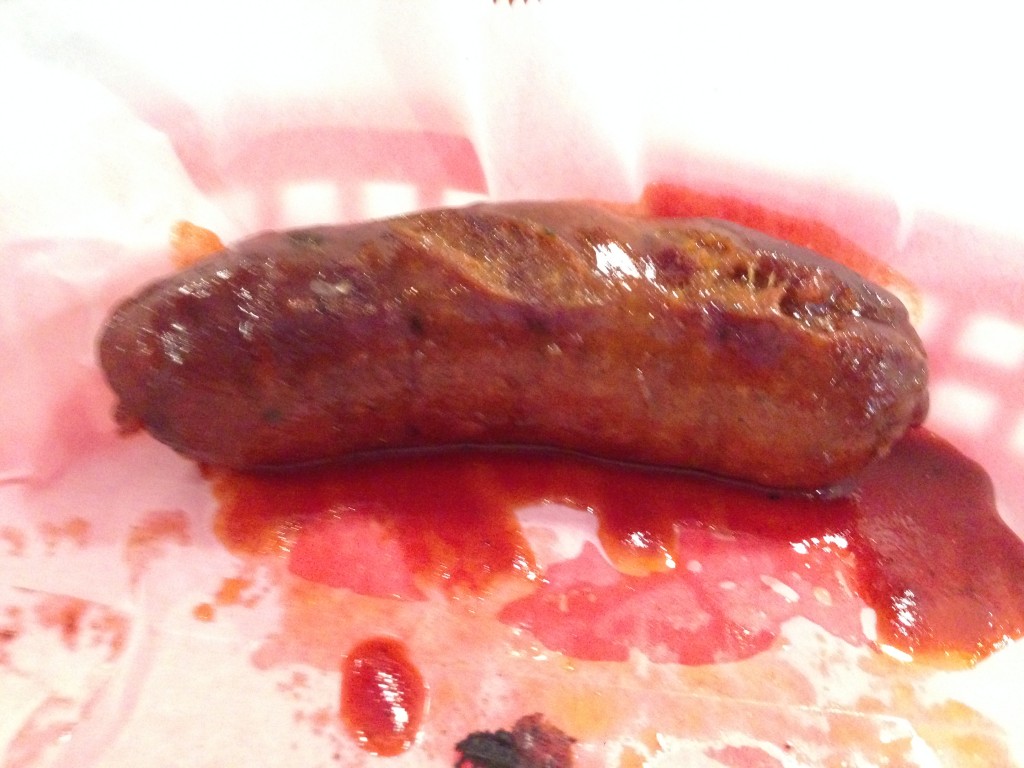 The sausage tasted like it was made of seafood.

The sides were average at best. The mac and cheese tasted like one you would expect to find at a cafeteria, the beans were straight out of a can, and the coleslaw was the one item of the day that didn’t have any sauce: it was just shredded cabbage without any dressing of any kind. I don’t know if it was a mistake or what they were thinking, but I would like to know what was going through the chef’s head when he made that decision.

Food: 1 star: Everything was covered in sauce. Terrible sauce.

Overall: 2 stars: Next time I’m in Chinatown, the only sauce I’ll see on my food is sweet and sour.