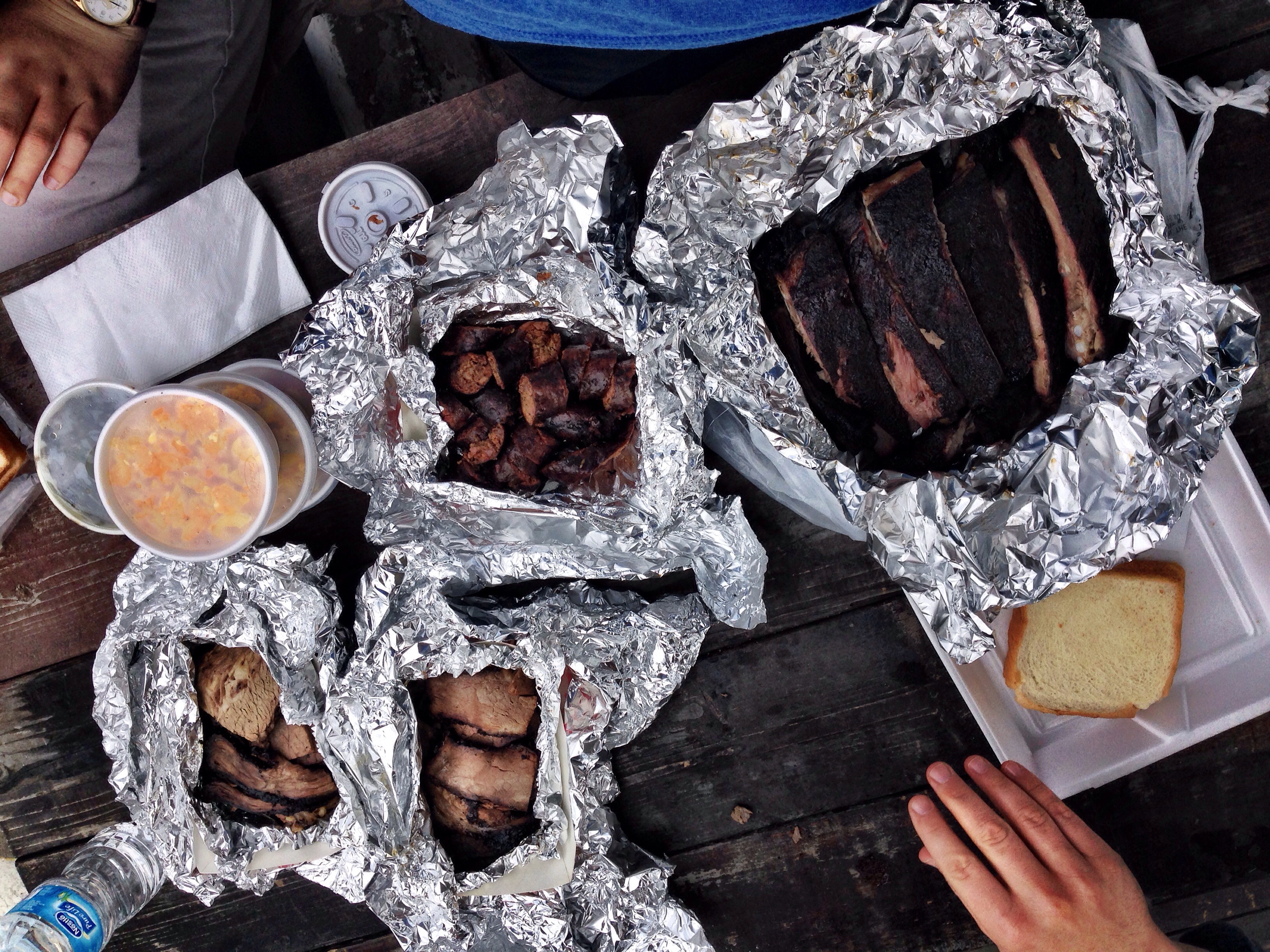 The word that keeps popping into my mind when thinking back on our journey to Bludso’s BBQ in Compton is ‘disappointment.’ If there was going to be an oasis of passable BBQ in Los Angeles, it was going to be Bludso’s. LA Weekly, Eater LA, and the LAist all named Bludso’s on their lists of the best BBQ in LA. LA Weekly named it the best. The closer we got to our lunch, the more excited we became.

Our excitement reached a fever pitch when we pulled into the parking lot. The first sight as we made the turn in was 5 huge (and most importantly wood-burning) smokers. They weren’t just for show either. When we climbed out of the car, we were hit by the welcome smell of burning wood.

“This is it,” we thought. “This is going to actually be good.”

The indoor seating area of Bludo’s is under construction, so all that was left of the restaurant was a counter to order your meat. We got a little of everything: ribs, sausage, brisket, mac and cheese, collard greens, cole slaw, and peach cobbler. When we ordered our brisket, we had to make sure to ask for the sauce on the size. As for the ribs, we were instructed by the lady taking our order that they were good enough without it.

After ordering we waited outside until our order was called. Bludso’s large sign read “Texas style.” Then, we wandered out back and inspected the smokers packed full of meat.

The front of Bludso’s.

They finally called our name, and we took our tin foil covered food to picnic tables out back. It smelled promising. Those three words played on repeat in our heads.

But when I took the foil off the top of our brisket, I thought I was going to cry.

Where was the smoke ring? What about the bark? Why is it grey? Texas style?

It tasted as bad as it looked. It was tender for sure but completely devoid of smoke, which seemed impossible with all this joint’s equipment. The flavor is hard to explain: there were bites that had a charcoal-taste, others just tasted like mush. My dad described it best when he said, “it’s like they pot-roasted it while inside the smoker.”

The other strange thing with the brisket was it’s inconsistency from piece to piece. Some pieces had no fat at all, while others had an inch and a half of fat hanging off of it. There was never a semblance of a smoke ring, but some pieces got lighter the further it got from the center. Others became darker, turning into an ashy grey.

Next up was the bright red-orange sausage, which was not any better than the brisket. The flavor was OK, the texture mealy and grainy, the casing lacked any snap. There was no need to grabbing a second piece.

The stand-out meat of the day were the pork ribs. They were coated in a bark as black as night and under it, there was—hallelujah! —a smoke-ring. The ribs tasted as promising as they appeared. The meat fell off the bone with just the right amount of tug. They were smokey, but there was also a subtle sweetness. The woman at the counter was right—they didn’t need any sauce. In fact, the sauce (which was more like a hot sauce than a BBQ sauce) made them worse. The entire rack was gone when we left. The sides brought us back down to Earth. The collard greens had so much salt that they were inedible, the mac and cheese had too much butter to enjoy (I never thought I would write that), and the cole slaw was very average.

The peach cobbler was overdone too, with what seemed like an entire container of cinnamon in it.

The ribs were good, but nothing else was. It’s not worth the trip out to Compton for Bludso’s. It wouldn’t even be worth it if I lived a mile away.

Food: 2.75 stars: The ribs were easily the best in the city, but everything else was entirely forgettable.

Atmosphere: 2.5 stars (for now): This ranking is incomplete since most of the restaurant is still under construction, but the plethora of smokers gives Bludso’s a 2.5 for now.