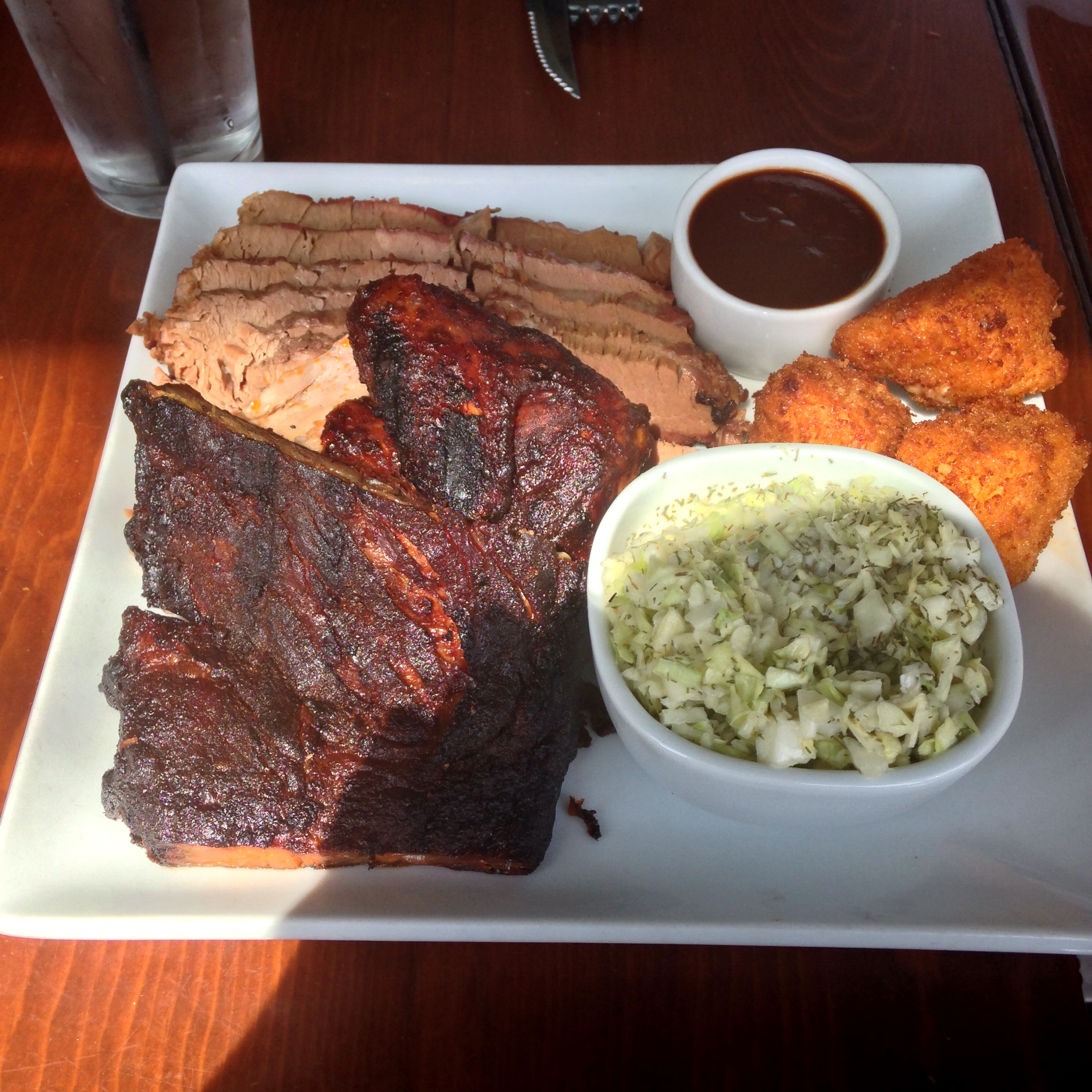 The three-meat plate at Boneyard Bistro.

Close your eyes and imagine a BBQ joint. You might see a huge smoker with cords and cords of wood around it. You might see a counter where someone is cutting your meat in front of you. You might see old posters and pictures adorning the walls. What you don’t imagine is Boneyard Bistro in Sherman Oaks.

When we strolled in for our lunch, the first surprise was the decor. It was very hip and pleasing; with a big, marble bar, shiny wood walls, table cloths, and paintings of skulls. A smoker was nowhere to be seen, nor was a whiff of any smoke. We sat down, put our cloth napkins in our laps and took a sip of water from our glass cups. The waiter (yes, waiter) gave us menus (yes, real menus), and we ordered the three-meat combo–ribs, brisket, and chicken. When we asked for half fatty and half lean brisket, the waiter said we could do one or the other but not both, and he also told us that white meat on our chicken would cost extra (and our meal was already pricey at $27 for probably a total of one pound of meat). We ordered cole slaw and fried mac and cheese on the side. 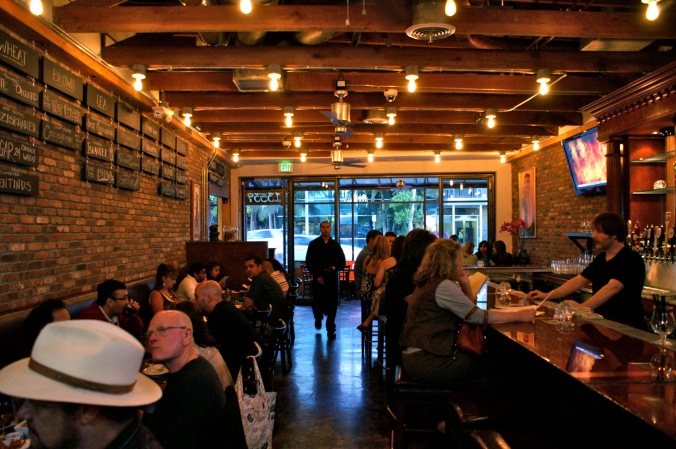 The inside of Boneyard Bistro.

When the meal came, the first thing we noticed was that any shred of bark, fat, and flavor had been cut off of the brisket and flushed down a toilet and the only thing left was on it was an oddly purple (and very small) smoke ring. When we went to eat it, it crumbled in our hand. We tried with a fork and got the same result. Somehow we got some in our mouth, only to be disappointed by the blandest piece of meat imaginable. We both agreed that the brisket had to have been smoked at least 3 days prior for it to possibly be so dry.

A close up of the brisket at Boneyard Bistro. All fat and bark had been trimmed off.

Next, we tried the ribs which had an extremely promising bark. The bark, however, was chewy, and the meat was as bland as the brisket. Adding some sauce didn’t help much. 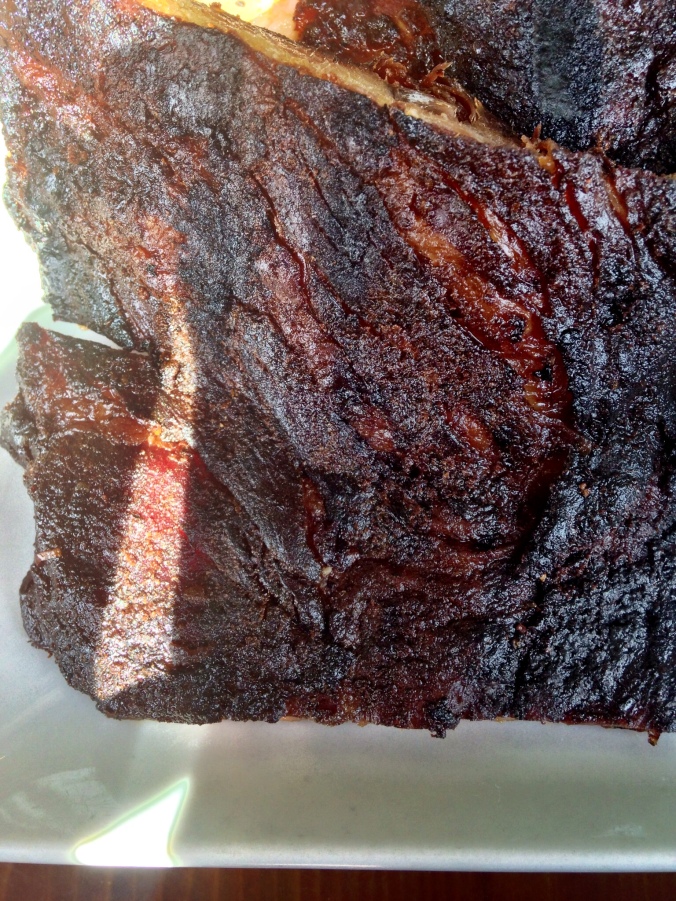 The bark on the ribs at Boneyard Bistro.

The best meat of the day was the chicken. It wasn’t smoky at all, but parts were moist and flavorful. While it was not anything special, it was still enjoyable

The chicken at Boneyard Bistro.

Then there was the cole slaw. The chef must have puked dill all over it, because that was all I could see or taste other than the pool of mayonnaise it was drowning in.

By far the highlight of the meal was the fried mac and cheese balls. On the inside was the cheesy, creamy goodness that we all know and love, and Boneyard Bistro’s was as good as any. This was enveloped in crispy, buttery dough that was deep-fried, giving the mac and cheese goodness added crispy, buttery goodness. PJ said after the meal, “I’d go back there and just ask for 50 of those.” 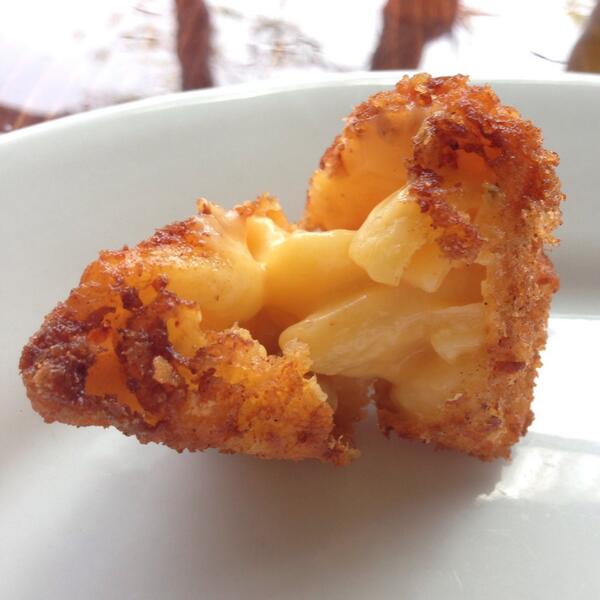 Walking back to the car with our hunger for smoked meat unsatisfied, the hostess offered us each a lollipop. At least they were kind enough to consider giving us something to get the horrible taste of their BBQ out of our mouths.

Food: .5 stars: The only reason there is any bit of a star is because of the fried mac and cheese.

Atmosphere: 1 star: It was a very nice restaurant. I would have thought it was great if I were getting a cobb salad. But when I’m getting BBQ, I don’t want a cloth napkin.

Overall: .75 stars: Boneyard Bistro proved once again that the BBQ scene in Los Angeles is dry. As dry as their brisket.