Philips Barbecue is less a joint than a window to order food. Small, painted wait, and unassuming, it sits in Leimert Park where pitmaster Foster Philips  has been smoking meats since 1980. With nowhere to sit, we ordered a small mixed meat tray (½ a slab of pork ribs, ½ a slab of beef ribs, ½ lb of brisket, ½ lb of beef links, ½ a chicken, 1 lb of rib tips, cole slaw, and potato salad) and took it home to enjoy.

When we opened up the massive aluminum tray, we found all our meats drowning in a thick, burgundy sauce. Disappointed at the sight, we fished out our lunch anyways and took a seat.

Here’s the deal with Philips: everything is fine and entirely enjoyable, but nothing is anything more than that. Part of that might be because of the sauce. Boiling hot, it was sweet and cinnamony, flavors I don’t want with my BBQ. Soaking with the meat in that aluminum tray added a soupy, steamy essence to our food. Had the meat come fresh out of the smoker, it might have been more enjoyable, but with the lack of seating, there weren’t other options. 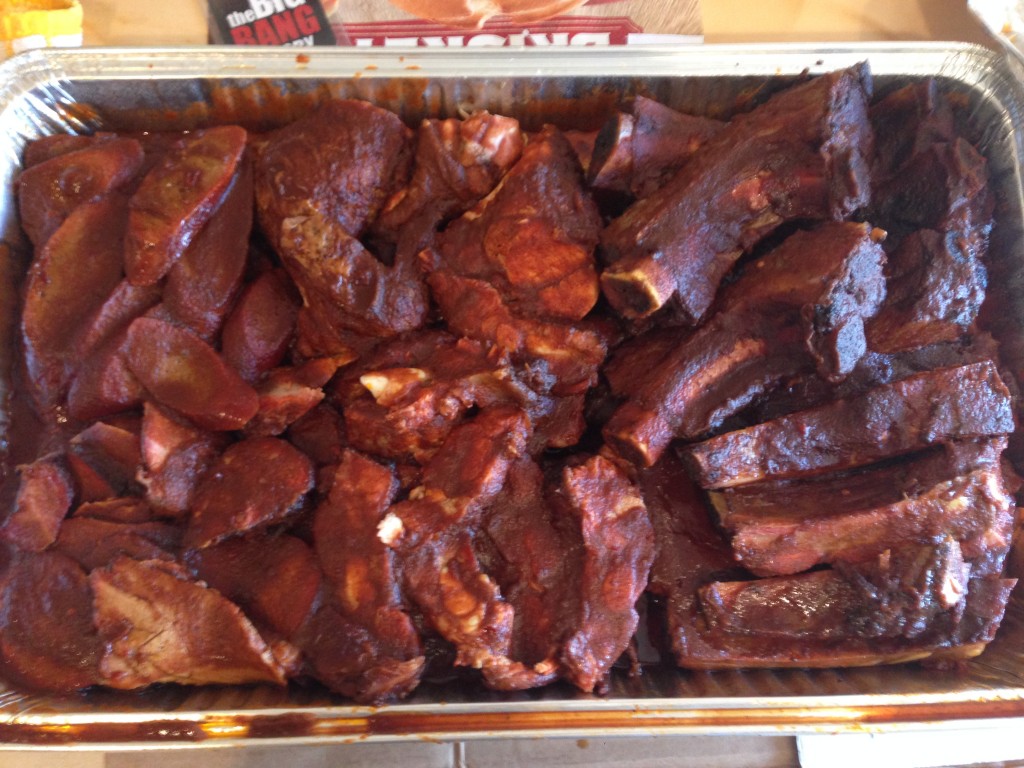 Both ribs had a fine tenderness, but lacked any flavor. The same could be said about the brisket. The sausage, though, was full of a rich, beef flavor that made up for a lack of smokiness. Within seconds, every bit of our half-a-pound was gone.

The standout meat was–surprisingly–the chicken. Perfectly tender and overflowing with juice, I can honestly say it was cooked to perfection. There was a hint of smokiness, along with a peppery bark. I would go back just for another bite.

Both the slaw and potato salads were disappointing. After one bite, they ended up in the trash.

Ambiance/atmosphere: 4 stars: Nice folks, lots of smoke, and the only thing missing was a chair to enjoy it longer.

Overall 3.25 stars: Nothing on the menu is below average, the chicken is amazing, and you’ll be hard-pressed to find nicer people in Los Angeles.