Warning: A non-numeric value encountered in /home/customer/www/bbqdesert.com/public_html/wp-content/plugins/color-scheme-every-theme/classes/Options.class.php on line 108
 Dispatches from the BBQ Desert

First off, I’d like to apologize. We haven’t been updating the site enough, and we know that. Living in The Desert can wear you down, and we let it beat us. We started to believe that our journey was hopeless. That we’d never totally find exactly what we were looking for. That we were hunting Sasquatch. As Los Angeles BBQ grew and grew, we shrunk away, afraid to go back after disappointing meal after disappointing meal.

We failed you. We are sorry.

But a few weeks ago, we were re-inspired by a single tweet. Jon Favreau’s El Jefe pop up was bringing Aaron Franklin to Los Angeles for a two days at Animal. It was the ultimate test: how good can BBQ be in The Desert. Is what we’re looking for impossible? Are we chasing Sasquatch? Because if anyone can do it, it’s the Lord and Savior Aaron Franklin.

I didn’t have answers. So, yesterday, I walked into Animal not sure what to expect.

In reality, it ended up being a little of both. 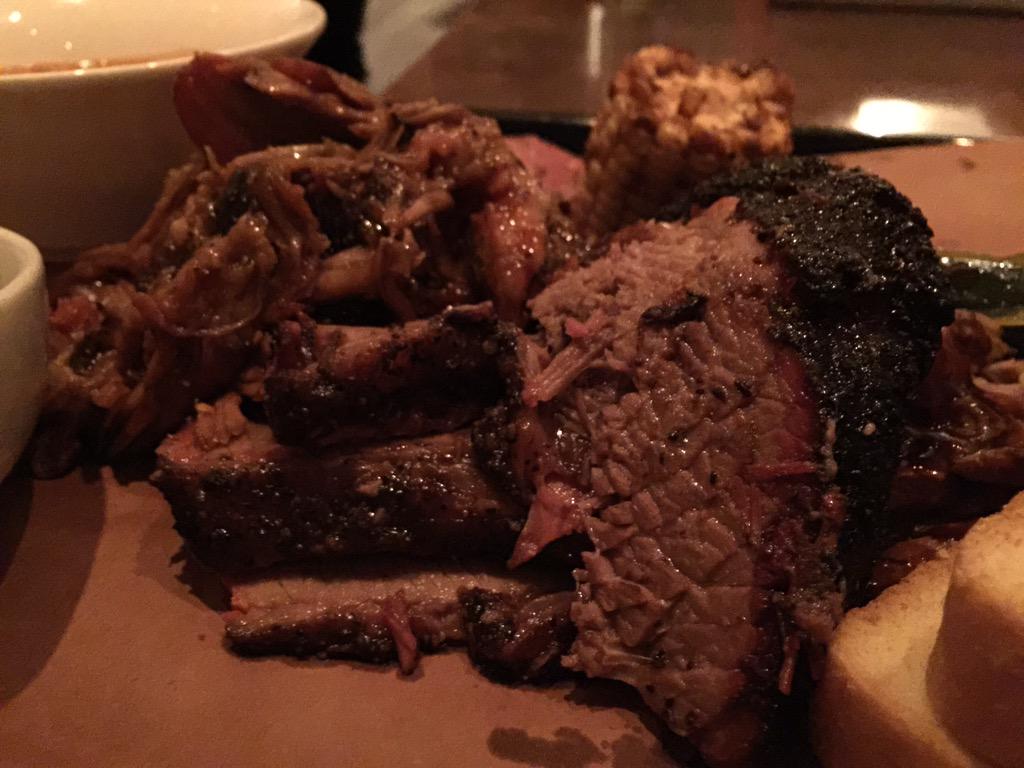 I’ve had Franklin’s food many times in Austin and as anyone that has been there will tell you, it’s absurdly good–as close to perfection as possible. What we got yesterday wasn’t quite up to that standard. Don’t get me wrong, it was delicious. Smoky as can be, with a thick black bark hiding tender meat that makes your taste buds jump up and down like third graders screaming “PICK ME! PICK ME!” Yet, the brisket (we were served brisket, sausage and pulled pork) was dryer than it is in Austin. Just slightly. There’s a number of reasons that might be: for starters, it’s less humid here. It might also be due Aaron being unfamiliar with the smoker (he told me his in-laws drove a smoker from Amarillo to Los Angeles, and to avoid LA’s stubborn smoke pollution laws, he had to go incognito in a friend’s parking lot to smoke the meat). The dryness could also be due to the brisket having to sit for a long time. We didn’t eat until 8 PM, and I would presume the brisket had been sitting awhile, especially since it’s smoked off site.

Even though it was a shade on the dry side, it was still the best barbecue you’ll ever dream of finding in The Desert, perfectly butchered, rubbed and sliced. There’s something different about Franklin’s brisket that was as true last night as it is in Austin, much like the difference between chocolate soft serve and dark chocolate gelato. Franklin’s is heavier, dense in flavor. So dense that after two slices, I hardly had room for sausage or pork (although both were also divine).

The best part of the night actually came before the main course, when we were surprised with a bowl of chile con queso packed with brisket. It was a Texas orgasm, and I loved every second of it.

So, in the end, yes, delicious barbecue is possible in Los Angeles, but even though The Master went AWOL and ditched smoke restrictions, he still wasn’t able to recreate the magic he makes in Austin. Maybe we were wrong to look Bigfoot, but I’m reenergized, and I won’t stop until I at least find his cousin.

P.S. Go and buy yourself a copy of Aaron’s new book, Franklin Barbecue. It’s like a college class in BBQ. A must read, especially for all the wannabe pitmasters of The Desert.

© 2023 Dispatches from the BBQ Desert